LGBTQIA+ Populations & Health Disparities: Leveraging DRVS to Improve the Health of your Patients

June is Pride month! Pride began as a way to honor the Stonewall Riots of 1969 and has evolved into a month of celebrating lesbian, gay, bisexual, and transgender communities. But as we celebrate our LGBT+ friends, family, and neighbors this June, we must also acknowledge and improve the health disparities these communities face. In 2016, the National Institute on Minority Health and Health Disparities officially designated sexual and gender minorities (SGM) as a health disparity population for research purposes. The term ‘sexual and gender minority’ encompasses lesbian, gay, bisexual, and transgender populations, as well as those whose sexual orientation, gender identity and expressions, or reproductive development varies from traditional, societal, cultural, or physiological norms.

It is important we discuss LGBTQIA+ health and health disparities for two reasons. First, there has been a long history of anti-LGBT bias in the healthcare system. Homosexuality was listed in the Diagnostic and Statistical Manual of Mental Disorders (DSM) until 1973 and transgender status was included up to 2013. As recently as 2002, 6 in 100 US physicians reported discomfort caring for LGBT patients. While public attitudes toward the LGBT community have changed in the last few decades (notably with the repeal of Don’t Ask, Don’t Tell in 2011 and the Obergefell v. Hodges Supreme Court case in 2015), bias, and especially implicit bias, has become entrenched into many areas of our healthcare system.

In addition to potential provider bias, there are multiple health disparities that affect these populations. Both Healthy People 2020 and Healthy People 2030 include LBGT health as a key objective to realizing health equity. The Fenway Institute, a leading organization on SGM health and disparities, detailed LGBT health disparities in their 2016 report, Understanding the Health Needs of LGBT People. Research has also shown higher rates of mental health conditions and unhealthy behaviors, lower rates of preventive breast and cervical cancer screening, and higher rates of HIV and other sexually transmitted infections in LGBT communities. Even within LGBT populations, there are disparities. Men who have sex with men (MSM) and transgender women have a higher incidence of HIV infection compared to the general population, and young, black MSM have higher rates of HIV infection than their white counterparts.

So, what can be done to reduce the health disparities of the LGBTQIA+ population? My first thought was to turn to the Centers for Medicare and Medicaid Services (CMS) Framework for Health Equity. Recently released, the framework highlights five priority areas to “design, implement, and operationalize policies and programs to support health for all people served by our programs, eliminating avoidable differences in health outcomes experienced by people who are disadvantaged or underserved, and providing the care and support that our enrollees need to thrive.”

The first priority area revolves around data: the collection, reporting, and analysis of standardized data. To effect change at the population level, we need standardized, patient-level demographic and social determinant of health data to help drive improvement. Accurate data will then become the baseline to compare outcomes and improvements in the population.

You can also look at the distribution of sexual orientations and gender identities of your whole patient population using UDS Table 3b. If an unexpected count is found, investigate by following the below steps:

Once you have a sense of the distribution of SGM in your population, you can use the Sexual Orientation and Gender Identity filter and Grouping option to explore trends and disparities within certain clinical quality and operational measures.

On a scorecard of clinical quality measures (like the UDS 2022 CQMs), using the Grouping option (1) of Gender Identity or Sexual Orientation and the Report Format (2) of CrossTab to look at performance across the populations. In the screenshot below, you will notice that the non-straight populations have lower rates of tobacco screening and cessation and cervical cancer screening. At the very end, you can see the Straight (not lesbian or gay) population has a higher HIV screening rate than the Lesbian or gay population, but lower than the individuals who identify as Bisexual.

You can drill even further into disparities across populations using the Comparison Chart on the measure analyzer. In the screenshot below, I’ve grouped the HIV Screening measure by both Sexual Orientation and Race. For all of the different sexual orientations displayed, the White population has either the lowest or second lowest screening rates for HIV. 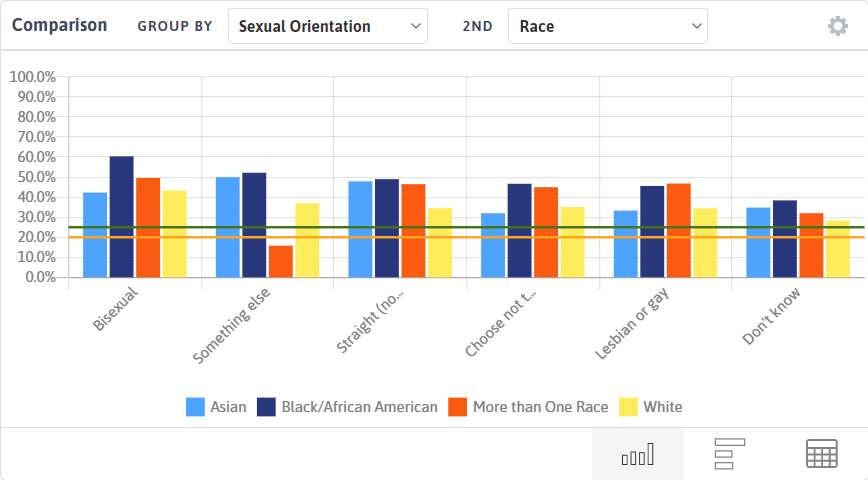 In the Cervical Cancer Screening measure, I filtered to the gender identities of Female and Transgender Male, and then grouped by gender identity on both the trendline and comparison charts. While the population sizes vary greatly, there is a stark difference in the cervical screening rates for individuals who identify as female compared to those who identify as transgender male. Transgender, nonbinary, and gender diverse patients who have a cervix are recommended to have regular cervical pap tests following the same guidelines published for cisgender women. The Fenway Institute offers resources on creating inclusive spaces for transgender and gender diverse adults.

In addition to disparities in clinical quality measures, you can also use DRVS to look at equity of access using the appointment and encounter measures available. Use the Gender Identity and Sexual Orientation filters and grouping options to look at metrics like No Shows, Same Day Appointments, Interactions/Patient, and New Patients by Service Line.

The Fenway Institute’s National LGBTQIA+ Health Education Center has many resources for advancing health equity and eliminating health disparities for LGBTQIA+ people. The breadth and depth of their resources provides a wealth of information for caring for SGM populations. You can filter by type of resource as well as by topic to find the information you are looking for. Check out the Healthy People 2030 objectives and resources surrounding LGBTQIA+ health here.

Pride month and every month, we celebrate our LGBTQIA+ communities and work to reduce the healthcare disparities these populations face. If you want to share how your organization is working to enhance health equity in these groups, we’d love to hear from you at feedback@azarahealthcare.com.