It wasn’t that long ago that the first Electronic Health Record (EHR) was transferred from one provider to another using a Health Information Exchange (HIE). In October 2012 presiding Massachusetts Governor Deval Patrick transferred his record across the state in real time as the Mass HIway went live – the first HIE funded by the Centers for Medicare & Medicaid Services (CMS).

Today, every state in the U.S. has one or more HIEs with various operating models. Some HIE’s are private companies while state government leads others. There are also hybrids, regional, and inter-organizational models supported by different funding sources. HRSA continues to incent and encourage the use of HIEs by Federally Qualified Health Centers for better coordinated care and in preparation for value-based payment models. In 2017, HRSA reported that over 75% of health centers are using some level of HIE capability. However, direct EHR connections to HIE’s from health centers, especially the smaller and more rural locations, can be expensive and complicated. Yet, having easy access to Inpatient (IP) and Emergency Department (ED) data from the HIE is critical to quality patient care.

While everyone, including Azara, agrees that the ideal place for the Admit, Discharge, Transfer notification (ADT) to appear is within the EHR, the process of making that happen is difficult, costly, and in most cases, goes undone. Health Centers are left to log into yet another portal or receive and coordinate daily emails to let them know which of their patients has checked in or out of an acute care facility, further complicating an already labor-intensive process. Working with customers in several states, Azara recognized the possibility of closing the gap on the “last mile” of HIE data sharing for the health centers. According to Azara CEO, Jeff Brandes, “By getting the ADT information into a tool that the Health Centers were already using on a daily basis, we could streamline and simplify the workflow required to follow up after an ED or IP admission. This represents a pragmatic solution to the ‘last mile” problem and while not the perfect solution, its a big leap forward for many participating organizations.” To make this work, Azara developed an approach and interface that allowed Azara DRVS to accept standard ADT messages from hospitals via their HIE, and expose that information via a number of new DRVS Reports, Measures and Alerts.

Making it Easy and Actionable

To ensure the correct patient data is being shared, in most cases Azara provides patient roster files to the HIE enabling the HIE to know for whom to route ADT messages back to DRVS. The HIE provides Azara a daily ADT message feed of all “registered” patients that have visited participating acute care facilities and, in turn, Azara makes the ADT information visible in DRVS reporting. The health center can easily see which of their patients have recently checked in or out of a Hospital or Emergency Department as well as the patient diagnosis and discharge disposition associated with that visit. Accompanying this information are some additional indicators of ED/IP visit frequency and any indications if this might be a readmission. This information allows health center staff to provide timely follow up calls, schedule necessary appointments and assure that there is a smooth and informed transition of care, with the goal of minimizing post-acute complications and reducing readmissions. In addition, if the patient has an upcoming health center appointment, the data about the recent hospital visit will trigger an alert on the DRVS Visit Planning Report and Care Management Passport prompting care team staff to engage in a discussion about the visit with the patient.

The following diagram provides an example of how patient data is shared throughout a healthcare ecosystem using HIE and DRVS.

In addition to smoothing the transitions and improving patient care, health centers can now track their progress on the relevant post-acute care follow up measures (some measures do require additional data be available to DRVS from the EHR).

Health centers can also track measures using DRVS dashboards and reports. The following is an example of a health center’s Transition of Care dashboard.

The impact that data sharing has on the community health ecosystem is vast. We spoke with a few Azara customers on how it is working in their states.

Missouri
The Missouri Primary Care Association (MPCA) integrated the largest Missouri HIE that serves 70% of the patients in the state, into DRVS. The integration provides nightly information and reports to providers and care managers on their patient activity at acute care facilities. The MPCA process also utilizes Azara’s Patient Visit Planning report to alert centers on who has been hospitalized and their diagnosis, where that information is available. The team at MPCA work tirelessly to improve community health center transitions of care and care coordination through this initiative, and their efforts are paying off as shown in a recent patient story from the Central Ozarks Medical Center (COMC) that uses the DRVS Transitions of Care reports.

New York
The Statewide Health Information Network for New York (SHIN-NY) consists of seven HIEs, each serving a geographically defined section of the state. Since its efforts began in 2016, Azara, working closely with the Community Healthcare Association of New York State and has been able to connect with five of these Regional Health Information Organizations or RHIO’s.

Based in Newburgh, NY, Cornerstone Family Healthcare has sixteen sites and serves four NY counties seeing over 40,000 patients a year. Not only are they using ADT information from DRVS, but the Chief Financial Officer also tracks where their patients are being admitted and discharged to improve partnerships with the area hospitals. Cornerstone leverages the HIE data received through DRVS for ongoing dialogue on rates, services, and privileges for their patients.

Ryan Health, on the upper west side of Manhattan, provides services for almost 50,000 patients annually. They discovered that they were not getting accurate data from their HIE directly on patients who were admitted to Mount Sinai Hospital, which serves most of New York City. By using the DRVS HIE process, their health center now receives timely, factual ADT information on their patients and has improved patient care and follow up.

Michigan
The Michigan Health Information Network Shared Services (MiHIN), a nonprofit created to coordinate and build the bridges between Michigan healthcare providers, provides technology and resources to make sure that the electronic health records are available for all that provide care. There are seven regional HIE providers in Michigan, known as sub-state HIEs, linking to the MiHIN backbone. Azara is helping make the connections between MiHIN, the Michigan Primary Care Association, and the states Federally Qualified Health Centers (FQHCs) using the DRVS platform to provide the right information to the right centers at the right time. Health centers receive the patient data and validate their records directly in DRVS versus having to go to the hospital or HIE portal to retrieve data which can be time-consuming, inaccurate, and require further validation work. Since embarking on this project in late 2018, the Michigan Primary Care Association Azara have been able to supply 25 of the MI FQHC’s this critical ADT information.

Arizona
Out in the Grand Canyon state, there is only one statewide HIE, Health Current, that has over 600 participants supporting 9 million unique patient records. Most of Arizona’s large health systems and Accountable Care Organizations (ACOs) are pushing data to Heath Current and some sharing data bi-directional.

The Arizona Alliance for Community Health Centers (AACHC) is the Primary Care Association for the state and represents FQHCs treating over 680,000 patients per year. There are currently 14 community health centers in Arizona using Azara DRVS as they continue their statewide rollout. North Country Healthcare that serves the greater Flagstaff area and Circle the City, who takes care of the homeless population in Phoenix, currently receive ADT patient data into DRVS daily. They can improve transitions of care for their underserved patient populations and are working on using the data to identify trends and social determinants of health that may be attributed to frequent emergency room visits and unnecessary hospitalizations. It is AACHC’s goal to scale the use of DRVS for ADT information statewide. As the use of DRVS increases, so will the amount of accurate patient data received at each health center from Heath Current. With the new infrastructure in place and access to relevant patient data, AACHC and their health centers have begun to enhance care management statewide, as well as use this information as they begin to identify high-risk patients, and improve strategic relationships within their healthcare ecosystem.

While the initial use case for integrating HIE’s and Azara DRVS was about bringing timely ADT information to the front-line staff within the Health Center, Azara is now exploring additional use cases that will expand the HIE partnerships and value proposition for all parties. One example of this is Azara DRVS becoming an “on-ramp” to the HIE, in particular, for Health Centers having difficulty providing clinical encounter data to their HIE partners. Two projects that will require Azara to supply data to HIE’s on behalf of participating Health Centers are already underway and slated for completion during the second half of 2019.

The Future of HIE

According to Healthcare IT News, health information exchanges are poised to become increasingly important as the Office of the National Coordinator for Health IT focuses even more on interoperability, as is mandated by the 21st Century Cures Act. States such as New York are increasingly using data to track health epidemics and population health statistics and others would like to better exchange social determinants and behavioral health information among providers.

For Community Health Centers with limited resources to connect to an HIE, the Azara DRVS solution provides them an effective and timely way to partner with their HIE and get the patient data they need from inpatient facilities to improve the quality of the care and outcomes for their patients. Now is the time to realize the promise of Health Information Exchange. 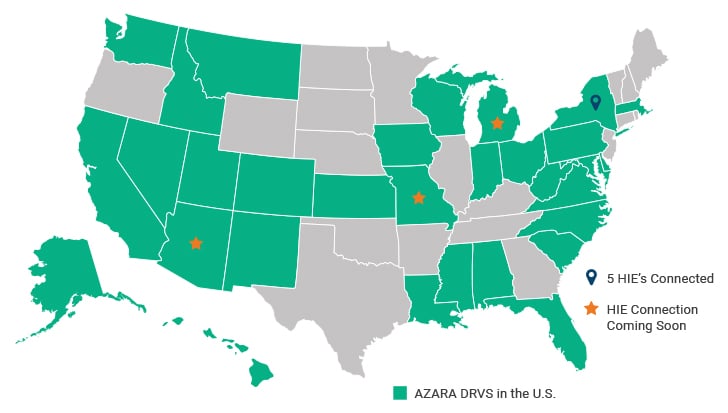